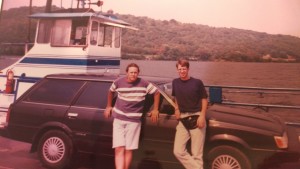 It’s official, I actually have a home page… This page you are on currently. I’ve finally come around to the idea that MySpace isn’t coming back. I probably should have done this from the start, but I was holding out that “the space” was going to be great again – especially after Justin Timberlake bought it. But I have to move on. Now I’m going to run everything through here – www.michaelstegner.com.

This site will have the following:

If you go to the “My Music” link, you will be able to keep up with new music release. You can also browse nearly everything I’ve released or been featured on. From the current works in progress to the angst-filled, nerdy teenage and early 20’s music from The Jongleurs. It’s sorted from most recent to the oldest. You can search by collaborators and musical genre if you are in the mood for something in particular. Many tracks will play right from the music page, if they don’t there is a video once you click on the link.

All other new posts will show up on the home page, so they should be easy to keep track of.

Who knows where this will go. But I’m excited to trade in my fanny pack, full head of hair and whatever those glasses were for the website I should have started when the picture above was taken.

This picture was taken on a ferry crossing the Ohio River in the late 90’s. Forrest was coming to pick me up at my parents’ home in Kentucky on our way to Miami. Late at night he was pulled over by a cop in a one-road town for speeding. The cop said that if Forrest didn’t write him a check on the spot, he was going to take his driver’s license. His car was packed full of all of his stuff for the move and finding the check book was not an option.

So the next day we drove back a couple of hours the next day to try and get his license back. We ran into the mayor of the town at the Post Office (for real). The mayor took us to the shed they called a courthouse and called the cop’s wife to get him out of bed because they couldn’t find Forrest’s driver’s license.

As a reward for getting that all sorted out, we took the two-car ferry back across to the Kentucky side of the river.

Peace in the Midwest.