The first few years I taught piano lessons, I remember nearly every student learned popular songs from sheet music. I grudgingly went along because I saw that the music meant a lot to them. If I was asking them to do traditional music most of the time, I thought it was a fair trade off to let them do a song of their choice from the radio, movies or television. 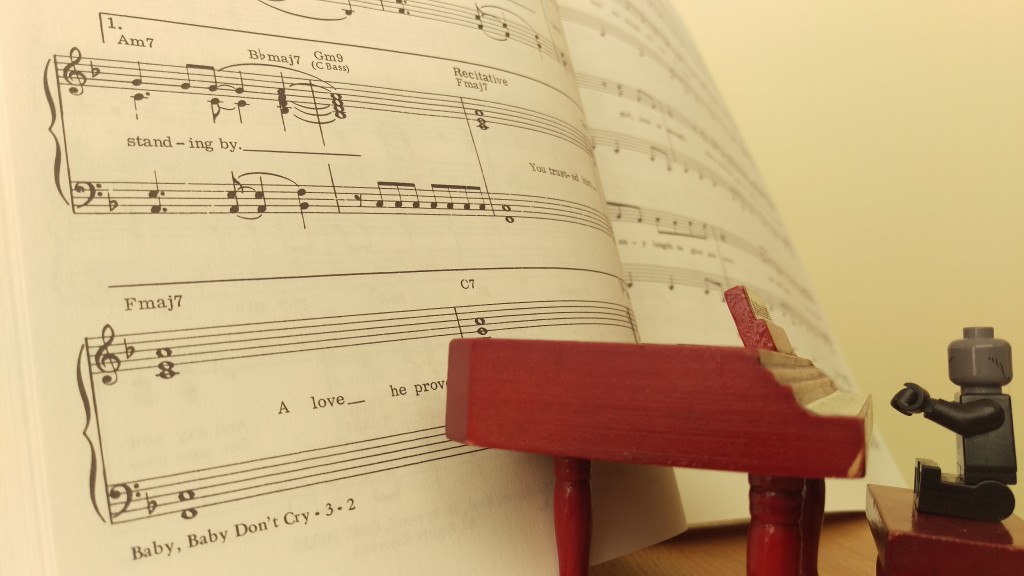 I changed my approach many times to try and increase the fire and grit to no avail. I found it fascinating that they had all of this enthusiasm for something at the start, but then it faded once they reached a certain point. On their traditional piano music, it was opposite – they usually dragged their feet when starting a piece, then got more excited as they improved on it.

My first inclination was to just write it off as the fact that classical music stands the test of time and this was a perfect example of the better music winning over the student in due time. I now realize that was lazy of me. The truth is, that I was teaching popular music in a way that didn’t connect the student to the source of their enthusiasm. Once I became completely honest with myself, I was actually contributing to the decline in the level of enthusiasm they had for the music. Bummer!

The first step I took was to ditch all sheet music. I found the arrangements to be so flat compared to the original recordings, I couldn’t blame the kids for not being inspired to see the process through. I’ve had a rule for over ten years in the studio – pop music is great, but we learn it directly from the source… The recording.

This is totally worth it… Because that first song that takes a couple of months to hack through, turns into them coming in with two or more pop songs completely ready to go each week – at a high level. I’ve had students who claimed to be “tone-deaf” (or I was adamantly told by their parents) who couldn’t match pitch work their way up to learning several pop songs a week by ear and singing while playing in front of 100+ people at recitals or school functions – and they weren’t even stressed. They owned the performance because they were connected to the source of their passion for that music. This process also helps them learn their traditional piano music much faster.

The next step was to let them know from the beginning that if they were to do a Taylor Swift song, then we were going to keep working on it until they could do it as well or better than Taylor. I can not tell you how much students appreciate this. No kid wants to play a watered down version of a pop song… They want to rock the song just like the record or the concert or the video. Students who would never sing all of the sudden came out of their shell and started singing in full voice through the lessons. More often than not I would go home from teaching blown away by what the student did in the lesson. Who knew that the kids were so dialed in to all the vocal ad libs, the inflections and the instrumental lines and fills? It is so inspiring.

By learning from the records, we started learning about the players and producers on the recordings… “You know that Kanye song you want to learn? The keyboard and guitar player on that is Mike Dean. Mike Dean produced a lot of hits for people all the way back to Tupac and Scarface. And when he was a teenager he was Selena’s musical director. Do you know how he learned to do all of that? He took classical piano lessons and learned to play Beethoven and Chopin and all of the composers you are working on right now as well. Then he applied his piano lesson knowledge to the popular music he was hired to play, record and produce. He talks about it often in his interviews.”

This brings the music to their world and not on some sort of glossy pedestal fueled by marketing. If all of your girls who want to play pop music don’t know about all the players in Beyonce’s band, you may want to get on that pronto. They will get really fired up to improvise, compose and perform to new heights. Here is Rie Tsuji shredding a classical-influenced piano intro on a Beyonce tour:

Finally, I had to be aware of the top quality tier of popular music. If a student brings in a pop song that isn’t very good, I’ll help them learn it. We’ll do the best we can and then I suggest another popular song in a similar style that is more interesting musically. After they learn it they always say something to the effect of, “That last song we did was kind of boring. This one is way more fun to play.”

And then I keep gradually stepping them up into more interesting and involved popular music the way we do with their traditional piano music. It keeps them growing on many levels musically, they stay really engaged, they begin to bring that fire to their other lesson material. And I get to learn new music from them all the time. It helps the lessons become a powerful bridge between the music they listen to outside of lessons to the traditional piano music that has stood the test of time. Eventually, it falls under the common language of MUSIC for them and their only concern is playing to their potential, rather than pitting styles against each other for no positive reason.