The Current State of Affairs The more you can do...

After a lesson with a student who has been working with me for nearly 14 years, I took a moment to assess the state of our room as I walked out, letting him tear down his gear. I was inspired to take a quick picture after realizing that this may not be a typical scene to many folks who teach, practice or took lessons at some point in their lives. 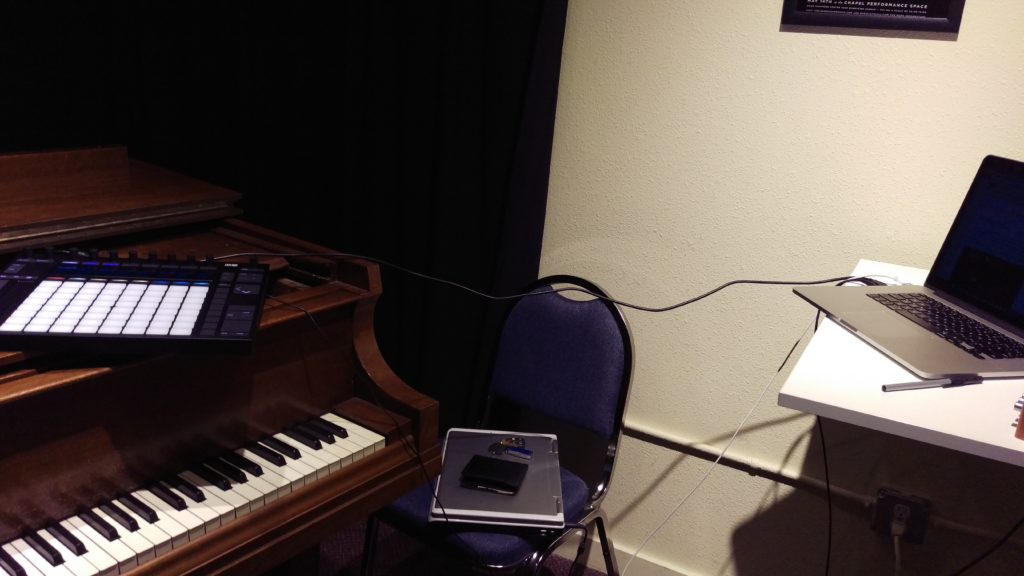 There are many folks who try and emphasize technology in music lessons and music education as a way to motivate students to practice more or engage with playing music. I tend to see this differently. After working with people in electronic music and production for a long time, none of the top tier people I know think about the technology first. They simply see it as a way to realize some musical or artistic idea they have. They don’t say, “I want to buy this gadget so that I enjoy making music more.” Typically, it’s more along the lines of, “This is really cool and I can see how this will help me sound better or create this thing I’ve always wanted to create.”

Once the artists get more comfortable with the gear, it can serve as something that is very inspirational in the creative process. But if they were relegated to pots and pans, they would make that technology serve them in a musical way too.

Here is an abbreviated list of things the student mentioned above worked on in our lessons this year:

He did other things on his own that I would check on every couple of months. But mostly we focused on the Chopin, Beethoven and Basie with the bulk of our lesson time. Then we would talk about the concepts he had accumulated over the years and applied them to the jazz and “technology” aspects of our lesson.

For example, when we work on the technique of how we transfer energy from our bodies through the strike of the keys to technology within the piano that converts that motion from our body into a specific sound by an eventual resonance of the strings, bridge and soundboard; we are working on the exact same thing people do who spend hours holed up in their rooms making beats or dance music.

The way we have time to work on this sort of thing in the lessons is that we draw parallels to things we just worked on with Chopin and Beethoven. “You know how we talked about controlling the balance between the parts on the fourth page of the Chopin by adjusting your attack on the different parts? That’s the same thing that this beat needs you make on your laptop. Let’s look at how to do that…”

The cool thing is that once we start to get into the software and hardware as teachers, we realize that most of the terminology is what we use when playing our instrument – attack, release, decay, cutoff, resonance, sustain, etc.

We don’t have to master this or even be 100% fluent. We simply need to draw parallels back to what we do know. The students can do the rest on their own time. If they need technical details on how to do what you’re asking of them, there are probably 100 YouTube videos of pros walking them through the steps to get the desired sound you suggested.

If you’re a teacher, try asking your students to bring in their laptops, apps, gear or whatever they may use to create music on their own time and have them play you a sample. It’s great opportunity to talk about touch, tone, theory, form and pretty much anything you’ve ever wanted them to work on – except from an angle that may help them receive the information more completely.

Maybe have them play piano (or whatever instrument/voice) along with their laptop/app creation at the next recital. It’s a pretty inspiring thing to see them get fired up about the possibilities – and they’ll play their instrument better.