The Fantastic Adventures of an Amphibian Named Jamal 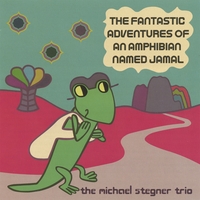 This is a live piano-trio performance captured by James Dunn. I mixed it with help from James Dunn and Brian Willoughby. Forrest, John and I had been playing together for a couple of years regularly as Spirit Tuck. John moved to LA but flew back to Seattle for a short visit. We had one really short rehearsal and then played this intimate concert. I tried to write music that would have a vibe but also be really easy to learn since rehearsal time was limited. As usual, John and Forrest nailed it.

The liner notes below are written by Michael Shrieve…

Michael’s compositions are at times playful, deceptively simple, always exceedingly lyrical with an elegance that comes through in everything that he plays.

This is a recording that you will want at the top of your playlist for a long time to come, and I highly recommend doing yourself the favor of turning off your phone, your computer, your TV, and anything else that might be a distraction and taking the time to thoroughly enjoy the music that these three wonderful musicians have made.
You will not be disappointed.