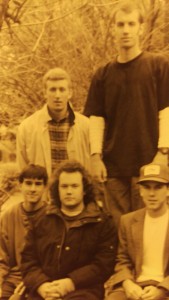 An Italian record label reached out to The Jongleurs and asked us to do a cover on their Mina tribute album (original version is the YouTube video). They said we should do whatever we wanted, as long as we sang in Italian. Matt had the idea that I sang it in my Kentucky accent. I often demonstrated the twang version of French class that I attended through high school as a party trick. So this was my change to document it on a recording.